Okay okay I know I am terrible at this blogging malarky but this week I was named and shamed on Twitter by the always lovely and never mean Sally Fort.

I was looking at my blog at the weekend and thinking that I should take everything off and start again but after reading some old posts and feeling fond of some of them I decided that I would carry on where I left off.

A lot has happened which I wont bore you all with but I have moved a fair few times and have now settled in a new flat in Blackheath which is my very own. It was terrifying purchasing a property and still is if I think about it for too long. For anyone who has been through the process of purchasing you will know what I mean. I have never felt so much like a child since I left home, being totally confused by lawyer speak and reading through the largest amount of paperwork I have ever had to read through. But anyway now we are in and at last I feel like I have a home, I am such a home bod.

Through my many moves I have been having a huge declutter. Many many bags of clothes went to my awesome cousin (biased as we have similar taste) and boxes of books/toys/cds went to the charity shop. But the biggest challenge was to clear through some of my massive fabric and craft supplies boxes. Some I can't bare to get rid of so I am going to hide it from my other half but the rest I am going to be gradually listing in my supplies shop on etsy. So if you are interested in picking up a bargin then pop over and have a look. I nearly didn't list the fabric below as it is just so cute but I was feeling ruthless. 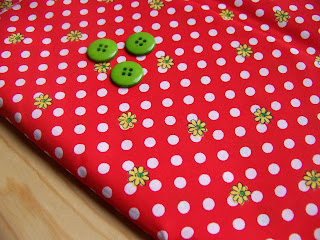 There are also going to be many changes for Laurafallulah soon, I am currently working on a range of handprinted goods. I have been drawing like I have never drawn before. I have never really worked with just a pen and paper, being more likely to dive straight into fabric and 3D design, but I am loving it. Hopefully I will have something to show you soonish.

Posted by laurafallulah at 17:31 No comments:

laurafallulah
I sew, a lot. It makes my fingers sore but I love it. I make bags, purses and brooches mostly but sometimes other things too.

You can also find me here